Dita, a leader in the luxury eyewear industry, will gift new optical frames to healthcare workers and first responders in new york during the COVID-19 crisis.

DITA, a luxury eyewear brand that has earned an unparalleled reputation in its 25-year history, will offer complimentary new optical frames to healthcare workers and first responders who are on the front lines of the battle against COVID-19. DITA has been continuously impressed by the tireless dedication and bravery of doctors, nurses, and other healthcare professionals during this unprecedented public health crisis and started this program as a way to thank these first responders for their heroic service.

The luxury boutique eyewear brand has invited all of the healthcare professionals at Stony Brook Southampton Hospital located in New York to participate in the program and plans to extend the program to additional hospitals in the coming weeks. The luxury eyewear specialists at DITA have selected a special collection of optical frames from which the healthcare professionals may choose and DITA will ship directly to them free of charge.

They have recently partnered with Main Street Optics in Southhampton New York to offer prescription lens servicing for the healthcare professionals at Stony Brook Southampton Hospital who participate in the program.

DITA hopes this gift of thanks and gratitude will inspire them during this difficult time and that they enjoy their new eyewear for many years to come. With many first responders wearing their existing prescription eyewear during long shifts, these new frames will likely be a refreshing change.

Founded in 1995, DITA reinvented eyewear by transcending its conventions, creating a discreet luxury with products ranging from bold character frames to new interpretations of timeless shapes through innovative technology. With over 25 years in design and partners at the highest levels of manufacturing, DITA’s expertise is unparalleled, earning a coveted reputation as a true leader in optical innovation. With exacting manufacturing standards and a complex design language, it can take months to create a single DITA frame.

DITA has a cult-like following and is a must-have accessory for many celebrities, musicians, athletes, and fashion industry insiders around the world. The company has experienced explosive growth in recent years and is now sold by more than 4,000 retail partners in 78 counties. The distribution includes some of the world’s most exclusive optical shops, fashion boutiques and department stores, such as Marc Le Bihan, PUYI, Barneys New York, Selfridges and Dover Street Market. DITA currently has 4 store-in-store locations in Japan and flagship stores in some of the most desirable shopping destinations: three in New York, three in California, two in Tokyo, one in Sydney, and one in Seoul. 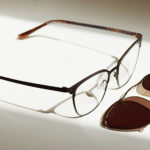 Morel // Switch to summer in a Flash