E.Gucewicz studio (pronounced “EE GOOD-SAY-VITCH”) was founded less than a year ago as an accessories atelier and they are about to launch their first limited edition collection of design pieces.

These are sunglasses styles spawned by a much loved decade for sunglasses shapes: the flamboyantly glamourous 1970s. The collection, entitled “RAW HORN”, is inspired by some of the most notable characters of that decade, from Aristotle Onassis to David Hockney through to the divinely performative: Mr Iggy Pop. 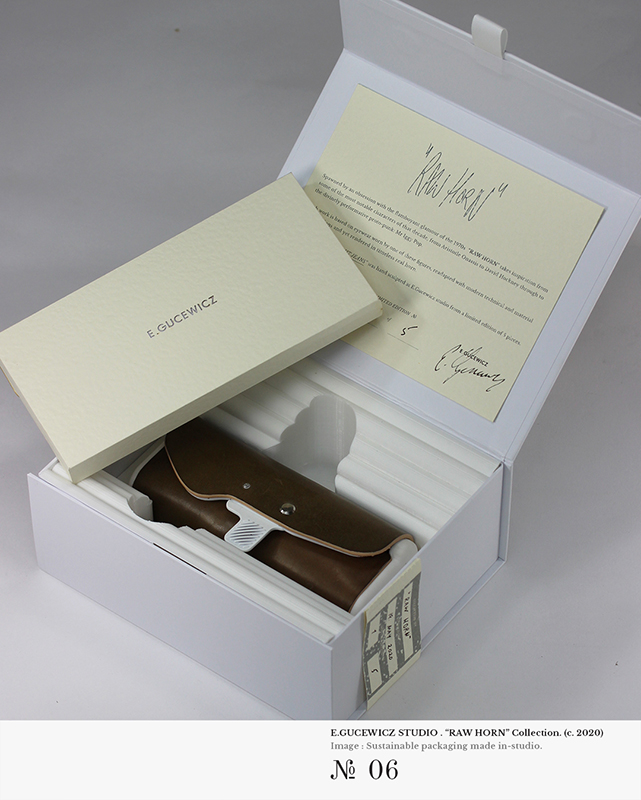 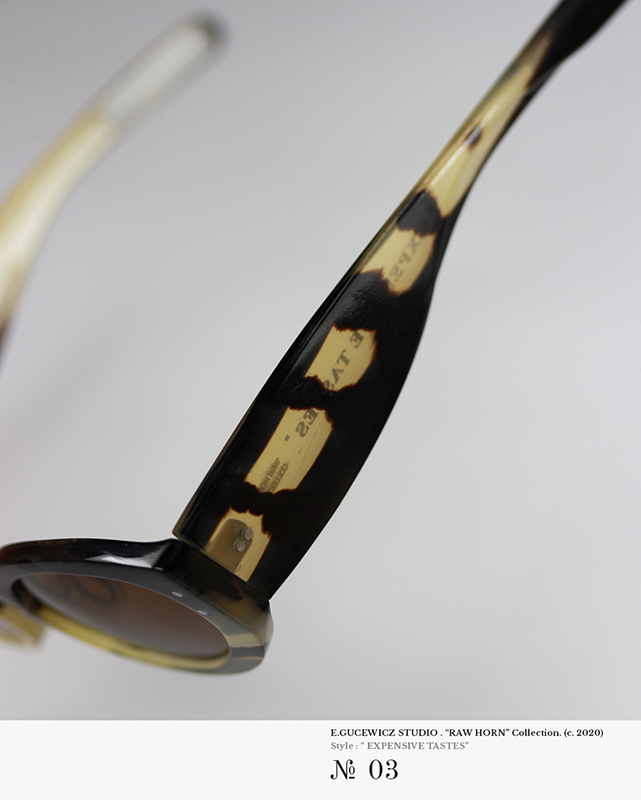 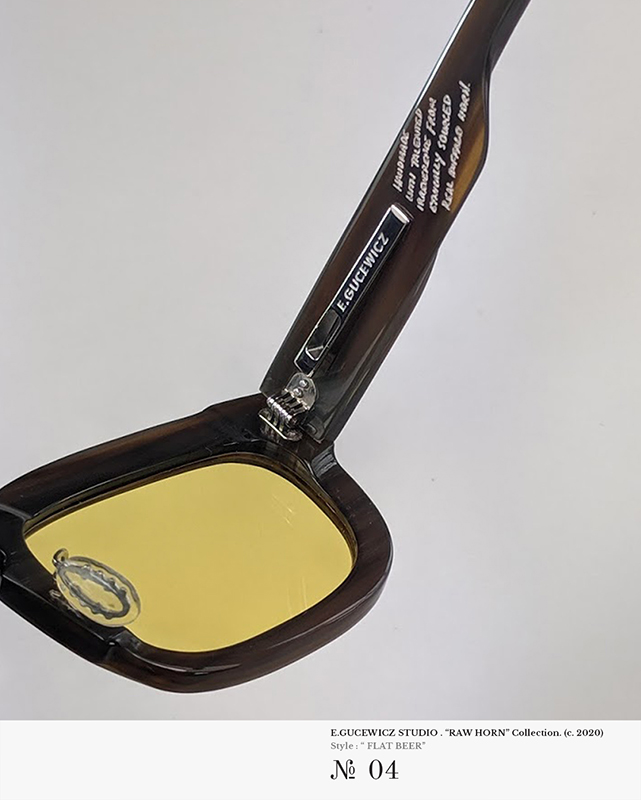 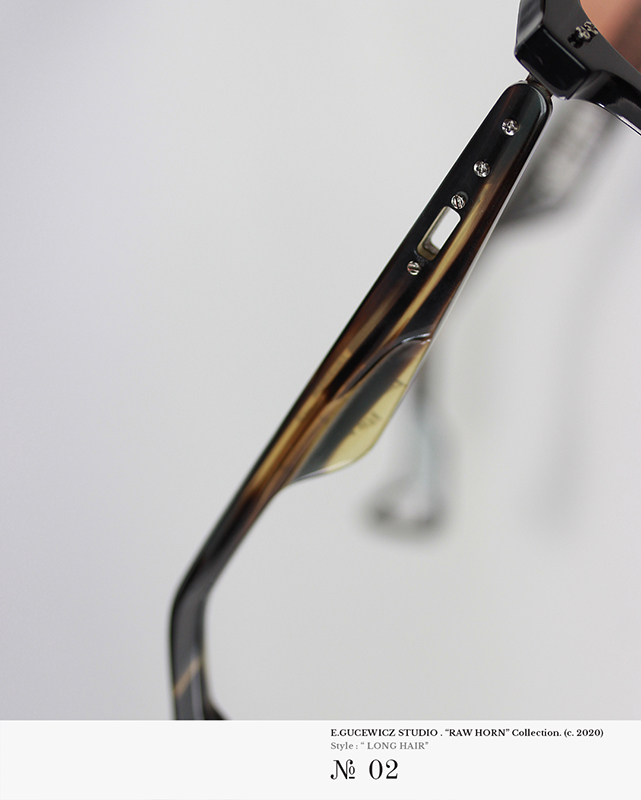 There are 5 different works created in a strictly limited edition of 5 units. Each work is based on eyewear worn by one of these notable figures, readapted using modern technical specifications and yet hand carved in the timeless material that is genuine horn. The result is a true 21st-century fetishization of the spirit
from another era. The horn material itself is an ethically sourced by-product, making it a surprisingly sustainable medium.

As a medium horn was chosen not only because of its inherent luxurious and aesthetic value but also because horn is more natural and therefore neutral and less likely to irritate skin than conventional eyewear plastics.

Edward Gucewicz has been a designer all his life, and until recently found himself baffled by how poor other designer’s imaginations seemed to be when it came to visualising 3d objects in their minds, he believed these designers were merely exercising vanity when they produced physical models or used 3d computer programs to help visualise projects they were developing. However after reading a past article in the Harvard Crimson earlier this year about stereoblindness, a subject which attracted Edward because he was born with total Stereoblindness he discovered that most people are simply unable to do in their head what he can do easily: build highly accurate mental 3d visualisations entirely in his mind – where he can manipulate: rotate, inspect and improve an object to a level of complexity that most other people will not comprehend, all before he needed to pick up a pencil or switch on a computer. Stereoblindness has arguably proved a rare and powerful advantage over other designers or artists.

As bombastic as that sounds, firstly appreciate what stereoblindness is: It’s not like true blindness, it’s simply the inability to ‘look’ through both of your eyes at the same time. However as innocuous as that sounds what Stereoblindness actually means for the brain is that it’s not receiving any depth perception cues from binocular vision: Therefore Edward has only seen the world in 2 dimensions and being stuck like this from birth the brain rewires itself a bit differently so the body can still smoothly navigate a 3d world using only 2d visual input. It’s actually easy for people without stereoblindness to imagine what it’s like: just close one eye, and keep it closed while you try and play a game of baseball or something. Then keeping that eye closed now try and draw something. While you’ll struggle with the former, the latter will always be easier, as squinting artists in museums across the world will testify; it’s always easier to draw with one eye closed. If your eye function is permanently like this then the brain’s ability to use compensatory cues kicks in more intensely, and you’ll start to simulate 3d landscapes within your mind with far greater ease and reproduce these imagined 3d forms and spaces onto paper or a screen with greater accuracy. One example is while most children can’t draw using perspective, and even some adults struggle with this concept, as a child Edward drew cityscapes employing accurate perspective long before he knew what it was, and would cut these up to make complex 3d models of the scene or geometric models with ease, and in fact, there is much evidence to support* that stereoblind people are far more likely to have advanced draftsmanship/sculpting abilities from an early age.

Mainly as a result of troublesome eyes, Edward has worn glasses most of his life too. So as his drawing and construction abilities edged him more towards a career in design it made perfect sense that he increasingly moved into the field of designing eyewear more over the last 12 years. Whether the work was for Edward own start up’s or projects undertaken with Ralph Lauren and Porter Yoshida, along the way he learnt what makes a beautiful object or pair of sunglasses. Now more aware of this rare 3d visualising capability he wants to leap-frog the current notion of what “good design” is – to a place where he believes design can be both ecological and profitable; where ‘minimum viable product’ as a concept is finally rejected in favour of minimum delightful product because design, products and life are all in need of being more positively delightful, whichever way you see it.

Each of their limited edition styles will be released separately, once a week over a five-week period. Their first work was launched on 4th July 2020.

Vision Show // It’s Back, Bigger Than Ever 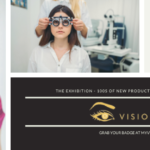 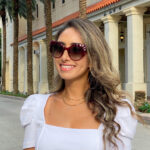