Showdown at High Noon at the Mud Bug Hotel, we caught Amy in a stand off!
Something must have gotten very wrong here!!

“Heavenly” by METRONOME Eyewear started out as a big mistake; Designer BISEI IWAMOTO wrote an instruction to add sunglass lenses, but the lab mistakenly placed clear lenses. He thought the circle lenses were a little too small, so asked someone to try them on. Surprisingly, this wasn’ t too bad as a normal pair of glasses. Bisei usually designs frames based on fundamental thought that the frames for sunglasses can be normal glasses, but not the other way around. “Heavenly” can do both!

“METRONOME®” is a brand founded by designer BISEI IWAMOTO.

In 2014, while living the life of a designer and stylist in Japan, Besei experienced a traffic accident that caused serious damage to his left hand. Around the same time, he was betrayed by his friend and business partner, who embezzled their company’s money, which left Iwamoto with no choice but to clear all their debts leaving him penniless. Bisei found himself working in a Japanese factory as an eyewear sample creation technician, and it was during this time that he became known for his work, however the damage to his left hand became a hindrance and resulted in a depression. While overcoming his difficulties, Bisei reflected on his lack of opportunities to travel the world and decided to pool all his savings and embark on a journey that saw him visit countries in Asia, including China, Thailand, Vietnam, Malaysia, Cambodia and Indonesia; followed by India, New York, then Sydney and Melbourne in Australia.

At that time, especially while travelling around Asia Bisei realised that:

“The Japanese technical skills of past generations was being lost due to the lack of interest by young Japanese people, therefore would it not be beneficial to educate others on the skills of Japanese eyewear, especially to those countries whose production levels were rising?” After returning home from his travels, Bisei gathered volunteers, raised funds and built factories in Vietnam, Thailand and Malaysia, where he dispatched a Japanese engineer who began teaching Japanese technology, and at the beginning of 2016 a glasses factory in Vietnam started it first production.

One day, while drinking with a musician friend, he was told:

“Why don’t you try producing your own brand again? You should make an album of glasses like a musician makes an album of music. Your work is as the designer, you are too skilled to be making glasses for someone else!”

From this conversation, Iwamoto began to develop his brand “METRONOME®”;

Every eyewear collection should have a story like a music album, and each design created should be accompanied with a title and narrative, similar to the lyrics of a song.  There should be a key and a tempo, with the key ranging from A to G, and the tempo from 42 to 200. The origin of the name came from an acoustic guitar and an old metronome that he had taken on his trip for the rehabilitation of his hand. While Iwamoto had to purchase a new guitar many times while travelling, the Japanese made metronome never failed and kept its tempo constantly.

Iwamoto was inspired by the accurate and sturdiness of the Japanese made metronome, hence “METRONOME®” was born. 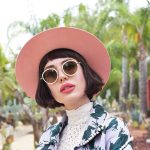 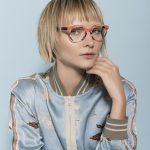