JF Rey’s line of FINE CONCEPT colored metal frames is enriched with three new rimless shapes that stand out for their airy and pared-down look. The originality and singular style of the collection are in the inventiveness of the metal, interpreted here by the playful combination of metal lines and drilled lenses, giving these “invisible” frames an asserted visual identity.

Jean-François Rey proposes an original and expertise approach to the rimless frame with three new models made in the designer’s own factory (ELLAPS, in the French Jura): an alternative concept halfway between the full metal frame and the fully rimless frame. The design is appealing for its contrasting minimalist style, between the discreet silhouettes of the lenses and the colored metal lines that run on the faces and reveal a contemporary geometry.

The creative layout and the differences in the thickness of the metal create a graphic visual rhythm punctuated by the drill points on the glass: strict lines superimposed for the double bridge of the male model JF2852, or more curved and feminine shapes for the models JF2850 and JF2851.

The work done on the brightness of the colors gives the metal style and character and gives the frames a strong graphic entity, a particular vibration well known to the Maison Jean-François Rey. 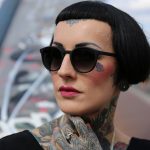