We pride ourselves on solely promoting independent eyewear and just “Ignore” the big-box brands while empowering passionate designers. But to ignore the passing of such an iconic visionair as Leonardo del Vecchio, is something we just cannot do.

Leo and I met 20 years ago, and even though we did not always see eye to eye, I was intrigued by his story of how he grew from an orphan into a conglomerate leader, and the impact he had on our industry. So it did make me very sad to hear that this optical icon had left us at the age of 87.

Born on May 22, 1935, Del Vecchio grew up poor in war-torn Milan. Unable to care for her son, his mother, widowed just months before he was born, sent him to an orphanage when he was seven. He began working as an apprentice to a tool and dye manufacturer in Milan when he was 14.

In the 1960s Del Vecchio moved to set up his own shop in the town of Agordo, in the Italian Alps north of Venice, from where his small supplier of eyeglass frame parts transformed into the global leader in optical, Luxottica. Del Vecchio grew Luxottica to become a leader in the design, manufacture, and distribution of some of the biggest name brands in eyewear, including  Ray-Ban, Oakley, Vogue Eyewear, Persol, Oliver Peoples, Arnette, Costa del Mar, and Alain Mikli, as well as licensed brands including Giorgio Armani, Burberry, Bulgari, Chanel, Coach, Dolce&Gabbana, Ferrari, Michael Kors, Prada, Ralph Lauren, Tiffany & Co., Valentino, and Versace.

Del Vecchio was constantly making deals and growing Luxottica, eventually merging his company with lens giant Essilor to become EssilorLuxottica forming an eyewear leviathan with a market capitalization of about 57 billion euros.

We salute this optical pioneer, and although we do not salute the path that his company has taken, and the effect it has on independent designers and independent boutiques, we are grateful for the fact that he was the true pioneer to take eyewear out of the zone of a medical necessity and into the zone of a true fashion accessory! Rest in peace Cavaliere!

Frank and Lucie // The POWER of JOY 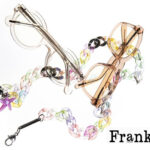 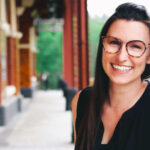