A percentage of sales from the first drop of rare, vintage and exclusive eyewear and fine art will go toward Voices of Children Foundation

Celebrated luxury eyewear designers Christian Roth and Eric Domège of Optical Affairs launch their e-commerce platform–more like a gallery and not just another online eyewear destination–with curated rotating drops of objects of desire, linking the past, present and future through an eclectic assortment of iconic Optical Af-fairs eyewear dating back to the 80s and 90s, rare vintage sunglasses, and photography and fine art pieces from around the world collected by the creative duo for the past four decades.

The shop serves as a vehicle for good will, where 25% of proceeds from the first drop will go toward Ukraine-based Voices of Children Foundation, an organization founded in 2015 providing non-stop direct aid to children and families in the region affected by the war through emergency psychological resources, assistance with the evacuation pro-cess, and fighting against the trafficking of children refugees.

Children are dependent on the care, empathy and attention of adults who love them, and it is a tragic reality that a certain proportion of war-affected children will lose all adult pro-tection. “It’s very unfair that children in the 21st century have to go through this situa-tion,” said Lena Rozvadovska, founder of Voices of Children Foundation.

Designers Christian Roth and Eric Domège met in Paris, reconnected in New York, and in 1983 founded the eyewear brand Optical Affairs. They were quickly hailed by the fash-ion community as pioneering fresh talents that would go on to change the course of luxu-ry eyewear with their unique point of view stemming from a myriad of historical and cul-tural influences. Their iconic designs have been depicted on the covers of fashion’s most esteemed publications from Vogue to Women’s Wear Daily, shown on catwalks of the most talented international designers, and spotted on trendsetters, fashion icons, musi-cians, artists, celebrities and royalties. In 1990, Christian Roth and the brand were in-ducted into the Council of Fashion Designers of America–a first for an eyewear design-er–and he became a founding executive member of Eyewear Designers of the CFDA (edCFDA) in 2014.

The subversive legacy that Christian Roth and Eric Domège have forged for almost 40 years has never been more relevant than it is today as a new generation rejects the ra-cial, gender, and class labels that once confined designers and their customers. Today, the Optical Affairs name has become synonymous with luxury eyewear featuring innova-tive silhouettes, techniques, colorations, flawless design, and craft. Now based in Miami, Optical Affairs was reactivated in 2022 to create a platform for art and design.
https://www.opticalaffairs.com/

About Voices of Children Foundation

The Voices of Children Foundation based in Ukraine has been helping children affected by the war since the Russian invasion of Ukraine in 2015. The organization provides psychological and psychosocial support to children, and helps them overcome the con-sequences of armed conflict. Voices of Children also helps families cope with everyday difficulties, including the treatment and rehabilitation of children, and assistance in the evacuation process. The foundation’s values are to respect a child’s dignity and rights; to understand and allow the needs of every child to be heard; and faith in getting the best results with help of partnership and mutual aid.

Read more about them on TEF Magazine or visit there website. 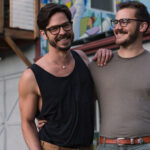